Open park space within urban environments is vital to the development and general well-being of the surrounding communities. As the population in these areas continues to grow and become more dense, the need for dedicated park space also becomes more imperative. Modern park designs require out of the box thinking and a creative approach.

Formerly known as Daley Bicentennial Plaza, Maggie Daley Park is part of a larger network of adjacent parks including Millennium Park to the west and Grant Park to the south. It is bordered on the east by Lake Michigan and Lake Shore Drive. Together these interconnected garages comprise the largest parking facility in the country.

Named after Chicago's beloved former First Lady Maggie Daley who died of breast cancer in 2011, the iconic Maggie Daley Park was designed to breathe life back into the downtown area. A portion of the park, including a play garden and ice-skating ribbon that can accommodate 700 skaters at one time, was opened to the public in December 2014. Additional work on the park is scheduled to be completed in Spring 2015.

The $60 million project was divided into three phases – removal of the existing park by James McHugh Construction Company; waterproofing and repairs to the concrete parking structure by Western Specialty Contractors and American Hydrotech; and re-installation of the park and construction of its new features by Walsh Construction.

The concrete parking structure, originally constructed and waterproofed in the 1970s, had become compromised from years of wear and tear and ground water infiltration. Essentially a giant green roof, ensuring proper waterproofing of the large parking structure was key to maintaining the structural integrity of the garage beneath the park. The scope of the parking garage project included structural repairs to the existing concrete roof slab, full removal and re-installation of a new waterproofing system and major drainage improvements. The project was full of challenges along the way related to logistics, coordination with other contractors, a tight schedule, public relations, location of the project, and the sheer size of the job-site. In order to help with job-site logistics, security and contractor coordination, high definition cameras installed high above the park were used on a daily basis to coordinate daily activities, work locations, material staging locations, as well as job site safety and security.

The project began with Desman Associates, a Chicago-based engineering firm, researching solutions to resolve the parking garage's major drainage issues. While the parking garage sloped naturally from north to south, pooling water had become a problem in specific areas due to the lack of drains throughout the massive garage roof. This problem was solved by the installation of numerous new drains and a composite drainage mat system.

The waterproofing system, manufactured by American Hydrotech, consisted of seven layers, which all serve an important function in the overall operation of the system. The initial step of applying the system included spraying the concrete deck with primer. The next phase required melting 40-pound, rubberized asphalt bricks to a liquid state by heating them to 400 degrees in a kettle. The rubberized asphalt would then be poured out onto the concrete, while it was still hot and in its liquid state. Workers then spread the rubberized asphalt out to evenly coat the area. In total, this project required over 1.3 million pounds of rubberized asphalt applied by multiple crews consisting of 40 workers per day.

Constant measurements were taken during the process to confirm that the material was not being spread too heavy or too thin along the deck. After the first layer of rubberized asphalt was spread out, workers rolled reinforcing felt fabric onto the layer of melted rubber, while still in its liquid state. Another layer of melted rubber would then be poured and spread out over the area. The next step required workers to roll out sheets of heavy-duty, rubberized asphalt protection board, which was specially made to prevent tree roots from puncturing the waterproofing.

The final layers of the system included a drainage mat, filter fabric and approximately 400,000 cubic feet of gravel overburden. In order to help speed up the project, Western worked directly with the manufacturer to have special, extra large rolls of drainage mat made for the project. Standard rolls of drainage mat are 4’x75’ (300 SF), but American Hydrotech manufactured job-specific rolls that were 7’x150’ (1,050 SF). This helped to keep the project on schedule. Installing the layer of gravel overburden was completed by Walsh, although a large amount of coordination was required between Walsh and Western to accomplish the task.

At the same time that waterproofing work was being completed on the topside of the garage roof, structural repairs were being performed on the underside of the roof slab. Coordination between crews on the topside and underside of the slab was a daily challenge for the management team. Use of cell phones was not an option due to very limited reception inside the garage. In order to overcome this obstacle, Western’s management team was headquartered inside the garage for the duration of the work.

Another obstacle Western encountered during this work was poor ventilation. This problem was solved by using high-powered vacuum fans to circulate air throughout the work locations. Since a large portion of the garage was closed during this work, every day represented a loss of possible revenue to the owner. Therefore, there was no room for extensions in the schedule. 24/7 monitoring of the garages was also required during this work due to high volumes of pedestrian traffic in the area.

The work inside the garage consisted of 3,000 square feet of overhead concrete replacement, and the detachment of two pedestrian access tunnels from the garage. Due to the excessive loads placed on the roof slab by the park above, the concrete slab was poured with additional reinforcing steel. This made removal of delaminated concrete more difficult. All 3,000 square feet of the concrete was removed using hand-held jack-hammers. After removal, all exposed rebar was sandblasted and coated. When prep work was complete, concrete was re-applied using a dry-mix, shotcrete method.

To ensure that there were no breaches in the waterproofing system after it had been installed, International Leak Detection (ILD) was hired to use its sophisticated Electric Field Vector Mapping (EFVM) technology to locate even the smallest leak in the roofing membrane.

The garage restoration work took a total of 33,554 hours to complete, with about 45 workers on the job per day. 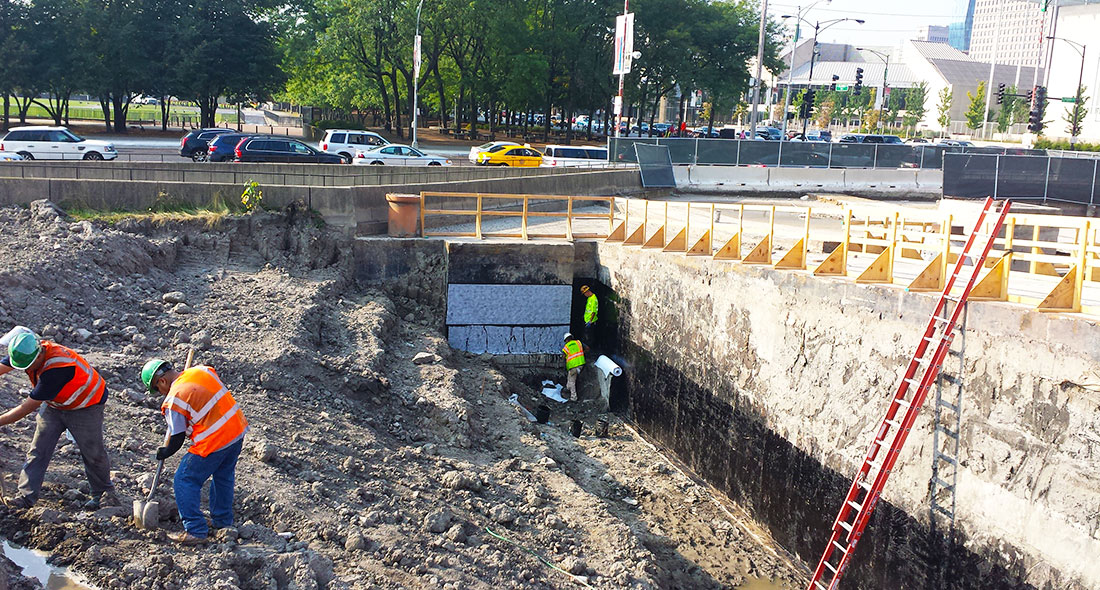 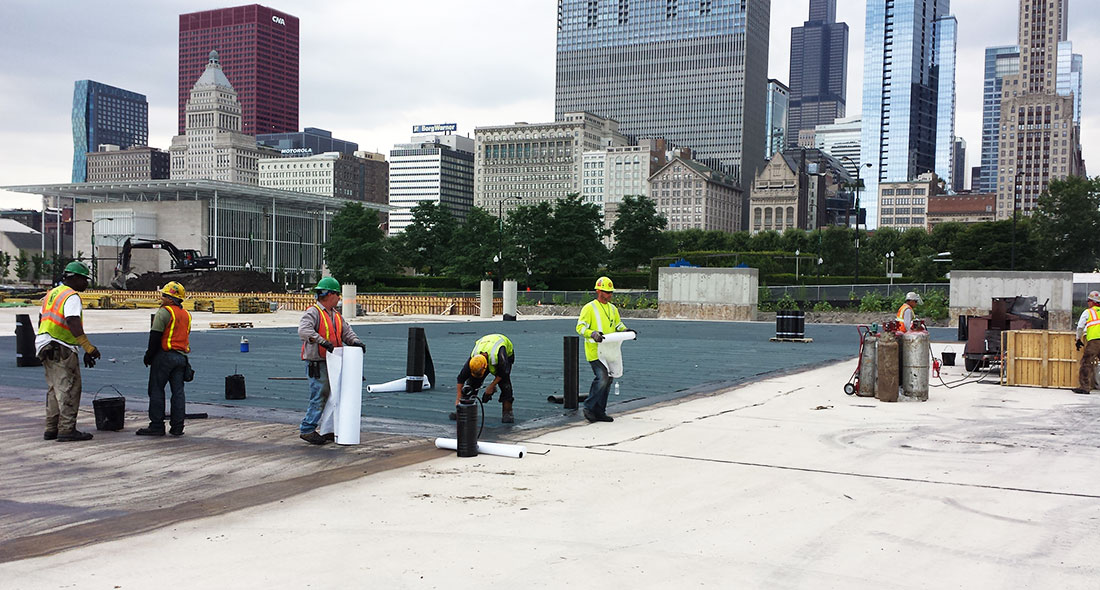 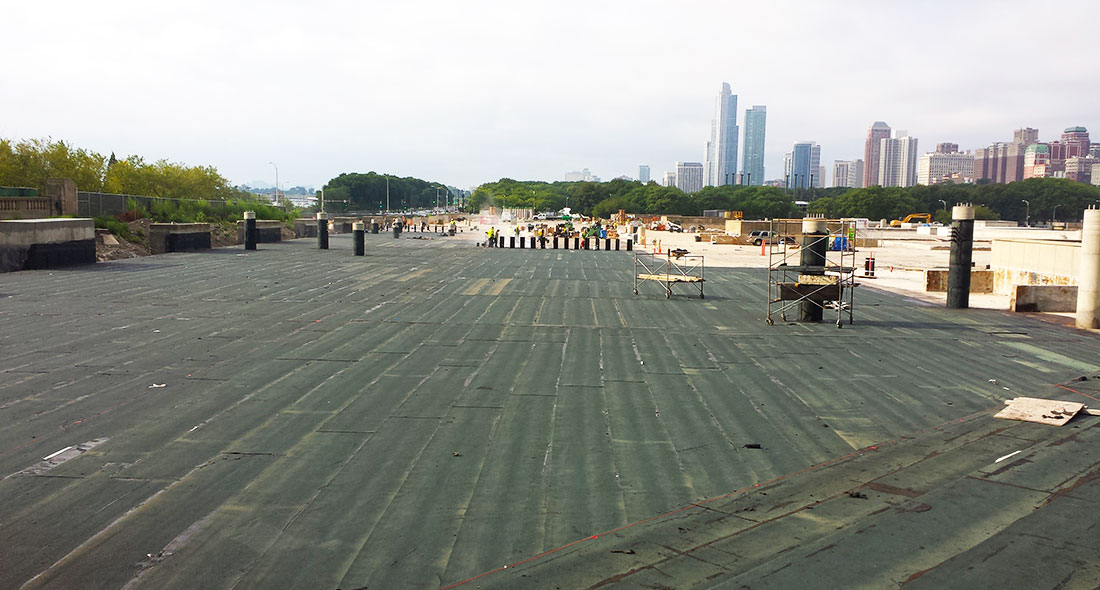 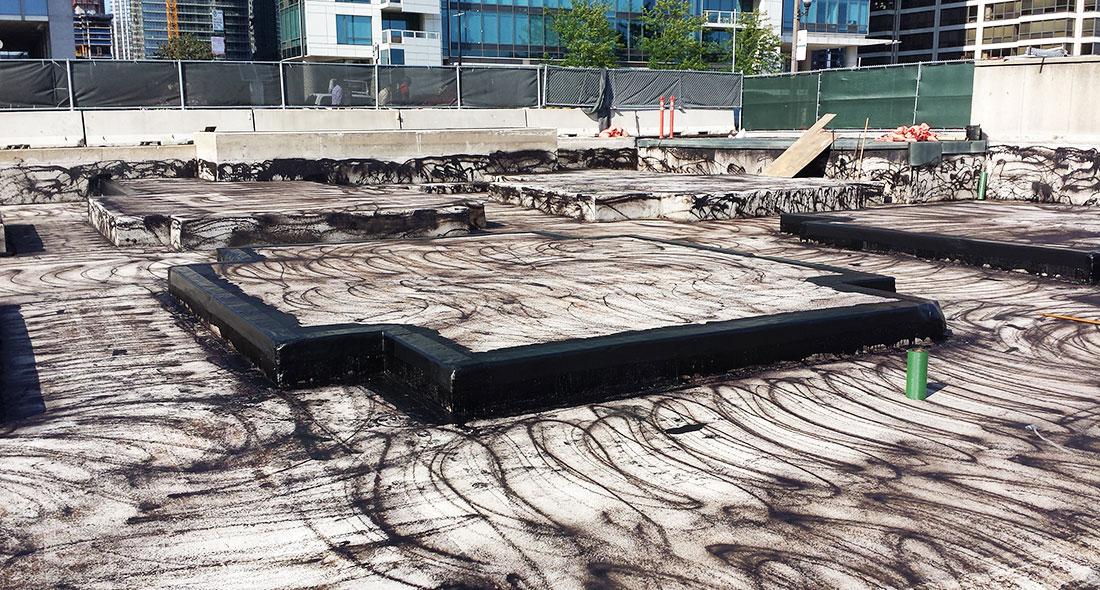 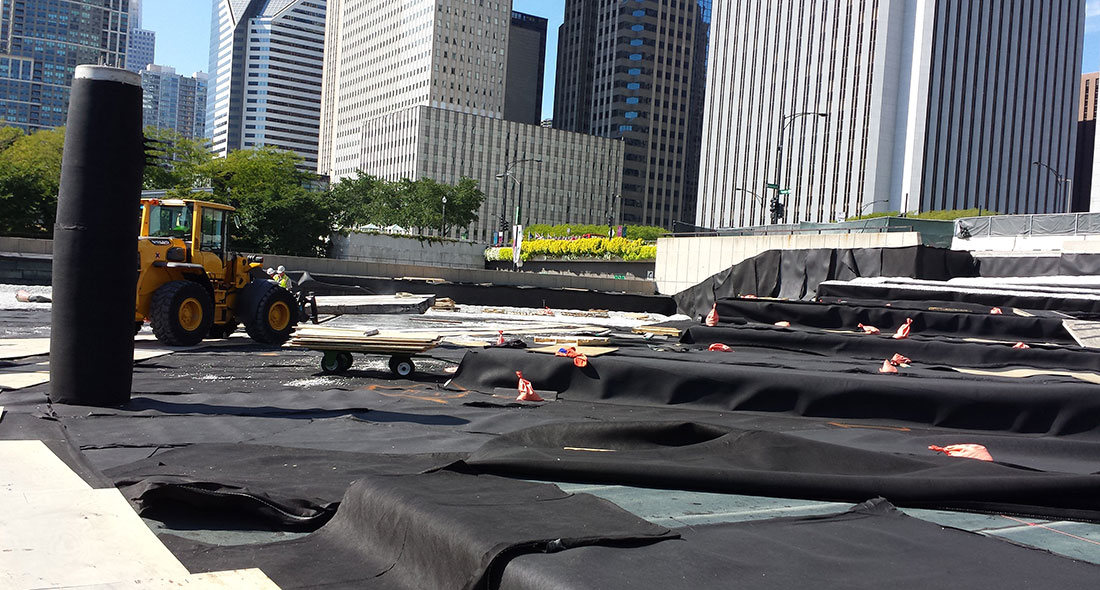 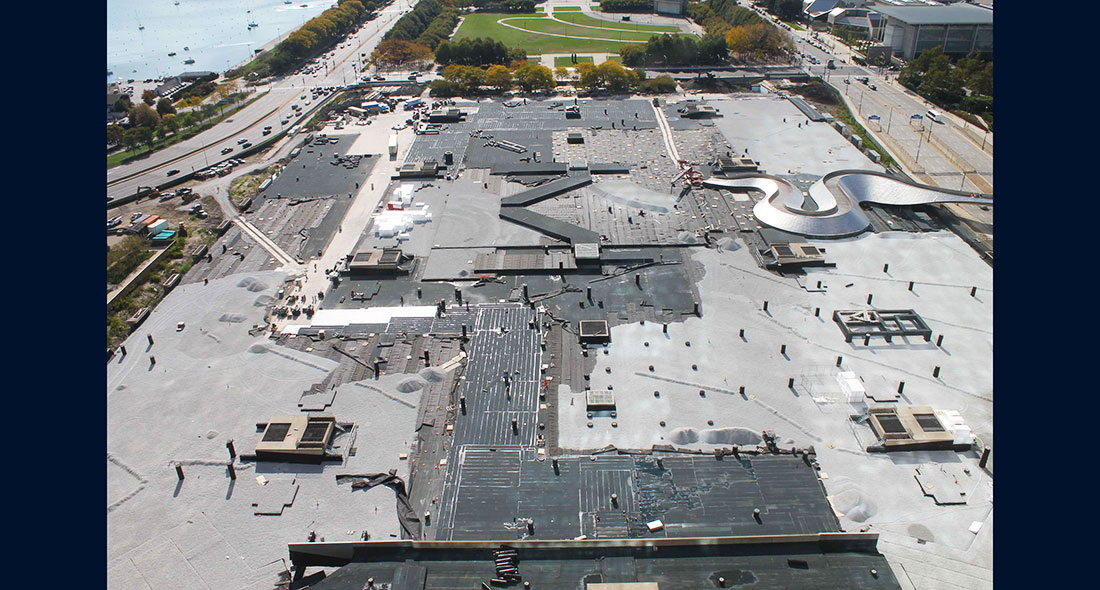 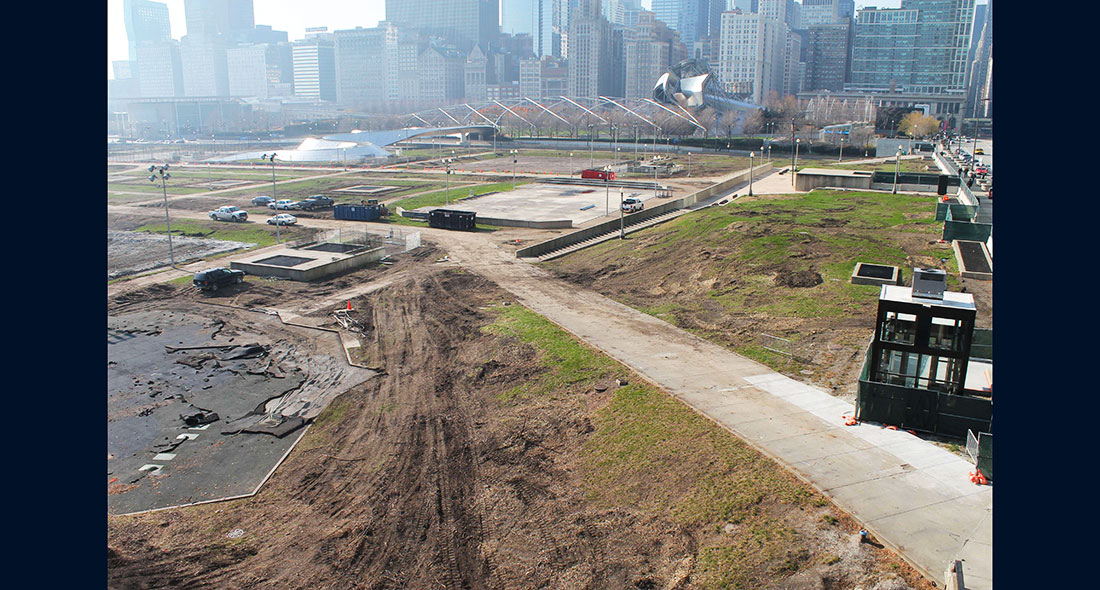 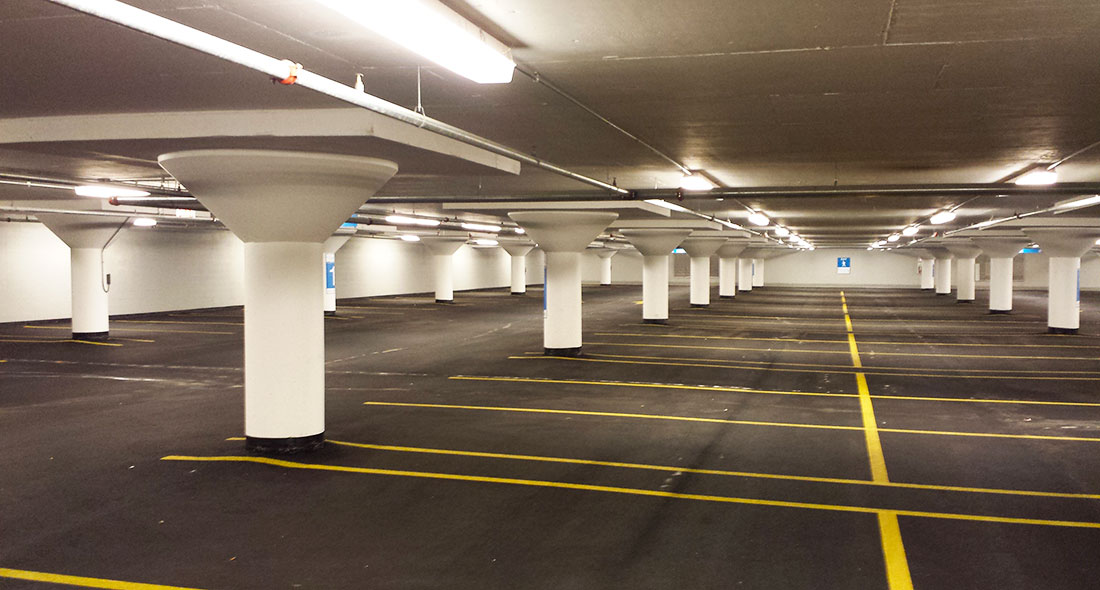