They have the ball on the five-yard line. It’s fourth down. They’re down by six points. And there are seven seconds left in the game.

The quarterback drops back to pass. The wide receiver breaks left. He’s wide open in the end zone. You’re going to win. He catches the ball, and the game is over. But something unexpected happens.

Just as the quarterback is about to throw, a defender sneaks past an offensive lineman and sacks the QB. Game over. You lose. Four out of the five linemen blocked perfectly. But it was the fifth one who let the defender get past him.

So let me ask you a question. How much do you care about those four linemen who blocked perfectly?

Only as strong as the weakest link.

You don’t care at all. The quarterback got sacked. Your team lost. It doesn’t matter how well the four linemen blocked if the last one gave up a sack. In football, the offensive line is only as strong as its weakest link.

The “strong as the weakest link” concept undoubtedly resonates with people who haven’t played a down of football in their life. And it’s crucial to embrace this mindset for exterior property maintenance.

Buildings and parking garages are made up of tons of different systems and components. A building has walls, windows, doors, floors, and a roof. Parking garages have columns, beams, decks, stairs, etc.

Building exteriors and parking garages work like an offensive line.

Much like an offensive line, all these different parts need to function correctly to avoid unnecessary problems, damage, and costs. It doesn’t matter if your building has the most waterproof walls on the planet if the roof is leaking.

Let me be clear. Each of these systems and components doesn’t need to function correctly. They just need to not fail completely.

Still, it seems impossible for a person to keep track of all the different components and make sure they’re working correctly. But it’s not nearly as difficult or time-consuming as you may think.

Tom Brooks is the Chief Operating Officer for Western, the largest specialty contractor in building envelope and parking garage restoration in the United States. He leads a team of 1,250+ employees and oversees all aspects of the day-to-day operations for Western’s 30 branch locations across the country. 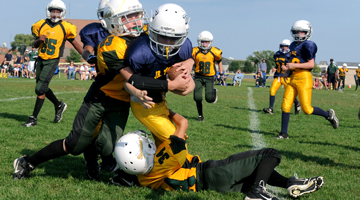