With 100 years of quality craftsmanship and dedicated service to display, this timeline exhibits the evolution of Western. Starting as a two-man crew, to a nationally recognized company, Western has defied all odds throughout the years to successfully reach the centennial milestone.

It All Started Here

At a time when the price of gas was 19 cents per gallon and the guns of war were booming across Europe, George Bishop Sr. and Ben Many established Western Waterproofing Company. 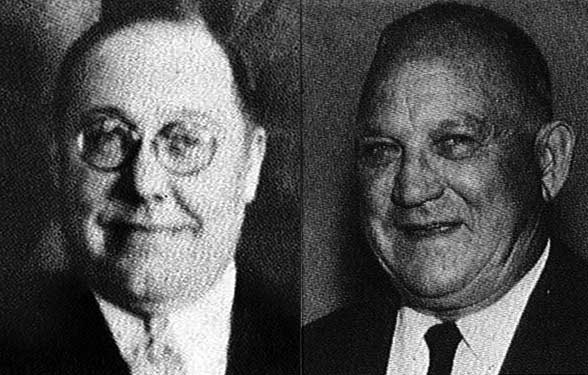 With an uncertain looming as the country sunk into what was to become The Great Depression, Benjamin Many and George Bishop Sr. were able to build up a good volume of business by providing honest, quality work for a fair price.

Western workers resurfaced the Packard Plant in Detroit, Michigan, in 1925.

As word of Western's quality work spread across the country, state governments began hiring Western to work on their capitol buildings. This would open up a new world of challenges and opportunities.

Western completed the restoration of the concrete substructure of the hydro plant at the Ford Motor Company in St. Paul, Minnesota, in 1938.

Fighting Off the War

After the Japanese bombed Pearl Harbor, the United States entered "war time". Companies were given all the work they could handle if they were producing for the war effort. In support, Western was able to continue working on various projects around the country.

Western restored the concrete at Sportsman's Park, in St. Louis, Missouri, in 1947.

In the 1950s, America was on top of the world, as was Western. News of Western's service and expertise began to spread across the country. The company continued to work on historic projects throughout the United States.

With a charismatic John F. Kennedy taking office of the Presidency, the country was primed and ready to tackle new frontiers. Western joined in, working on several new and "unusual" projects during the 1960s and expanding their business.

Uniting on All Fronts

The 1970s were a time of collaborations and movements across the entire country. Citizens were protesting for civil rights and demonstrating against the Vietnam War. In 1977, Western united in its own way, acquiring Brisk Waterproofing Company, to broaden its customer base and extend its geographic reach.

Western removed the deteriorating roof at Busch Stadium in St. Louis, Missouri, and replaced it, applying a special primer in 1979.

As the company continued to grow in the 1980s, Ben Bishop Sr. was appointed President/CEO. During the decade, Western would double its volume, establishing Ben Bishop Sr. and his team as effective managers carrying on Western's long tradition of quality craftsmanship.

The 1990s were seen as "The Last Great Decade" in American history, but not for Western. The company opened several additional branches and acquired Harry S. Peterson Company in 1995. The addition complemented Western's services in the Northern Illinois Area.

Western was given the opportunity to work on the Transamerica Pyramid in San Francisco, California, a number of times. In addition to installing the original exterior sealants on the 853-foot landmark, Western recaulked 20 miles of joints between the building’s 4,000 precast panels in 1984 and was hired in 1999 to clean the exterior of the skyscraper.

Changing of the Guard

The 2000s were a rough decade for all Americans as The Great Recession swept across the nation. During that time, Bill Bishop retired and Benjamin Bishop Jr. was promoted to President/CEO in 2000. Later in the decade, Western would acquire North Texas Waterproofing & Restoration as well as Peoria Roofing & Restoration Company.

With 606 residential units, 215 East 68th Street is one of New York’s premier rental properties. Completing the project in 2012, Western removed the building’s white brick facade and replaced it with a white terra cotta cladding. Western’s Facades division received the 2013 Transformation Award from Friends of the Upper East Side Historic Districts as part of the design team for re-cladding the Rudin family’s East 68th Street property. In 2014, Western also received the Trinity Award from the Sealant, Waterproofing and Restoration Institute in the Waterproofing category for their work on the building.